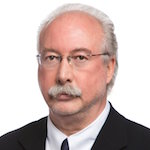 As Senior Policy Advisor for Global Economic Policy, Sherle Schwenninger guides the Council’s research on how a US carbon dividends program can respond to global macroeconomic trends and can best be integrated with the climate policies of our trading partners, who we will encourage to also consider a carbon dividends framework.

Previously, Mr. Schwenninger was founding Director of the World Economic Roundtable, an NGO which brings thought leaders from business, finance and public policy together to better understand unfolding changes in the global economy. From 2007 to 2015, he was Director of New America’s Economic Growth Program, which developed new strategies aimed at strengthening the productive capacity of America’s economy through expanded infrastructure investment, corporate tax cuts, regulatory streamlining, and on-shoring of jobs and investment. One of the original co-founders of New America, he served as Director of its Fellows Program, and subsequently as Director of its Next Social Contract Initiative.

Mr. Schwenninger was founding Editor of World Policy Journal from 1983 to 1991, and served as Director of the World Policy Institute from 1992 to 1996. In 1990-91, he was a consultant to the Cuomo Commission on Trade and Competitiveness and was a Senior Program Coordinator for the Project on Development, Trade, and International Finance at the Council on Foreign Relations. He is a founding Board member of and an adviser to the EU Rim Policy and Investment Council, a European organization concerned with energy and regional security issues. Mr. Schwenninger writes and speaks frequently on questions relating to the U.S. and world economies and on issues related to American foreign policy and international economic strategy.